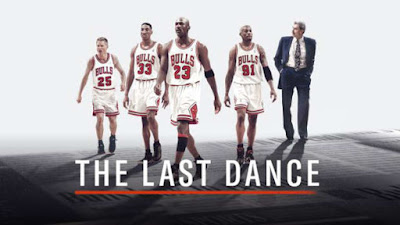 so if you haven't heard of the last dance, you truly live under a rock or really dislike sports. with the absence of live sports during rona times, folks have been relishing in past recorded sporting events. i'm not big on recorded sports and thrive on the live nature of a sporting event if i can't be there in person. i stumbled on a re-air of this year's super bowl and no thank you. i don't need to relive that heartbreak. when my not-so-sporty friend recommended the last dance i dove in, largely because it was a docu-series and fav coach steve kerr would be getting a segment. i love that kerr sports his dubs gear prominently during his segments. if you needed more reason to love a guy that took a punch from michael jordan and didn't back down, this reporter's story will undoubtedly have you lauding kerr as the kindest dude.

in the 90's, i was a sad warriors fans. one shining moment was when chris mullin was part of the dream team, but largely it was disappointment from talented players that wouldn't get their true due: tim hardaway, chris webber and latrell sprewell. we didn't really get a glimmer of hope until the late aughts with the we believe team. i still obviously watched the nba finals in that decade. it was crazy how many nostalgic feels i had for players who lost to the bulls: isiah thomas (does another remember the mary thomas movie?), charles barkley, john stockton, mailman karl malone and reggie miller. also, i forgot how physical it was in those early 90's and the pistons were no joke.

i will probably get a lot of beef for making this comparison, adding loose comparison.  there's no doubt that bulls are the all-time greatest team, but the recent kerr-helmed warriors aren't too shabby. they did take away the all-time regular season wins record from the bulls, but yes they didn't get that ring in 2016. draymond!!! draymond is the dennis rodman, with the fire and basketball iq. dray has more heart for the team than rodman did, but they were both the key defensive piece on their championship squad. next loose comparison, klay thompson is scottie pippen, taking a backseat to the star, however integral to the core efficiency of the group contributing with clutch shooting and defense. quiet and stoic. trade rumors. big difference is that klay got paid and scottie didn't get his due monetarily.  ok truly, no comparison for jordan, but if we look at the star of the team that'd be steph curry although he is like a million times nicer and less salty than michael. then, turn to compare to kevin durant and that explosive, nike toting athlete does have a stronger thread, but he wasn't franchise player like michael was and steph is. the key to a comparison is the link that is steve kerr, who was part of both teams and translated that triangle offense to the warriors. 5 back-to-back appearances in the nba finals with 3 championships, albeit not a 3-peat. draymond!!!!! this season was a wash, but perhaps warriors will return stronger than ever with th core intact - steph, klay and dray. missing my sixth man, andre iguodala. ido feel he would come back if the right dominos fell into place. until the nba season resumes, i keep believin'.

return of the bookworm

so i've been a little quiet, but largely because the current state of the world has kept us inside. as a culture vulture, i was worried i'd be struggling without live music, art and performances, but strangely i have settled well into this "new normal."

things i've learned about myself

beautifully written and researched. i was surprised how quickly i breezed through this historical piece. hartman brings profiles to life with thoughtful prose.

Americanah by Chimamanda Ngozi Adichie
My rating: 4 of 5 stars

pretty much loved it, except i felt the ending was just a little too sweet imo.

Trick Mirror: Reflections on Self-Delusion by Jia Tolentino
My rating: 4 of 5 stars

jia is so so smart, but doesn’t make you feel dumb. her writing is relatable, yet also so astute.

The Lonely Hearts Hotel by Heather O'Neill
My rating: 4 of 5 stars

3.5 but rounding up. love me a bittersweet ending.

Tell Me More: Stories about the 12 Hardest Things I'm Learning to Say by Kelly Corrigan
My rating: 4 of 5 stars

when a book is peppered with golden state warriors references, i'm in.

"that's how it works: someone important believes in us, loudly and with conviction and against all substantiation, and over time, we begin to believe, too-not in our shot at perfection, mind you, but in the good enough version of us that they have reflected."


4 touchdowns for raheem mostert was not the typical west coast offense coach walsh taught us, but it's a new era and a familiar trip to the super bowl. we are going in as slight underdogs and it seems a majority of folks are rooting for KC. this faithful is hoping that her fav team can pull out that upset february 2.
Posted by sharock 0 comments
Email ThisBlogThis!Share to TwitterShare to FacebookShare to Pinterest
Labels: forty niners, niners, raheem mostert, san francisco forty-niners, sports

my friend-coworker sam puts together an annual collation of top song for the year end.  here was mine from last year. this year's below and the full collection of lists here. i went deep into my 90's r&b feels last year and it's evident in artists that made my mix. only three of my artists (sharon van etten, normani and king princess) made it on other lists. 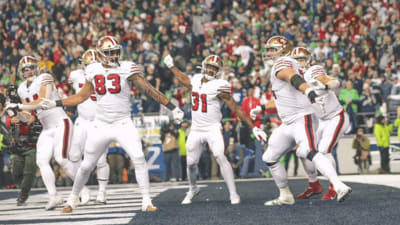 it was a nail-biter, just as their previous monday night match-up with the seahawks. we had a commanding 13-0 lead going into the half, but we faithful know that's certainly not enough against one, russell wilson. hanging by a 26-21 lead with less than 2 minutes left, wilson went to town, BUT failed to get a touchdown with 8 tries. sure there was a questionable PI that was missed and a delay of game penalty, but come on it's unfathomable that the niners were able to make 8 stops in the final minute. it was fitting that a rookie drew greenlaw stopped jacob hollister inches from the goal line. this season has been about our excellent defense and our deep roster. for a rookie to make such a game winning play, BRAVO!

so we get a bye and hopefully get back jaquiski tartt and dee ford in 2 weeks. we will probably have a rematch with seattle unless the eagles have something to say about that. until then i'll savor a few of these milestones:

Small Doses by Amanda Seales
My rating: 5 of 5 stars

i can't recommend this book highly enough, especially heading into a new year. amanda provides sage advice and life lessons wrapped in a cozy blanket of intelligence and humor. just a few affirmations i loved:

* find the joy
* circle of dopeness
* refine the rage

the hustle vs. the grind

WWMBFFD? (what would my best friend forever do?)